More than 50 years ago, women used to make toy monkeys out of socks to keep their kids company because many toys were too darn expensive. Now, nostalgia has catapulted the homemade monkeys back into people's hearts. There are hundreds of sock monkey World Wide Web sites on the internet -from cheeky to reverent- where owners reminisce about owning a monkey "just like Grandma used to make."

On one site, a chimp named "Nate" asks you to sign his guest book and sign his trip to Indonesia. On others, women advertise "custom-made" socks, like the mini-monkey, which is tiny and has washer-safe-eyes.

Traditional sock monkeys are about 16 to 20 inches tall and made from brown tweed fabric. The girl monkeys are distinguished by embroidered eyelashes, and the boys usually have caps. Inexpensive and easy to make, these simple chimps first became popular during the Depression, only to be tossed by the wayside in the '50s and '60s when the economy improved and more sophisticated toys hit the market. But those who thought the woolly gray-and-red creatures were near extinction should think again. Sock monkeys have become so popular that they are now featured in television commercials.

Thank you for being a Rockford Monkey Customer. 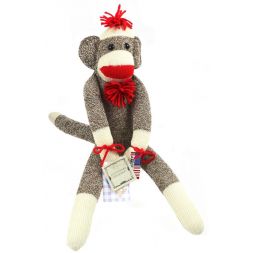