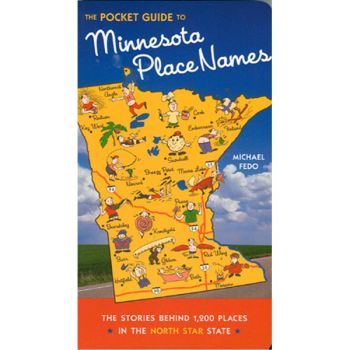 By Michael Fedo
The Stories Behind 1,200 Places in the North Star State
A handy and entertaining pocket guide to the origins of place names of the North Star state.
Within our state's borders you'll find such exotic place names as Amor and Darling, Fertile and Conception, Comfort and Happyland, Looneyville and Nimrod, Flour Lake and the Diarrhoea River, Great Scott and Eureka, Home and Nowhere, Moonshine and Whiskey Creek, Stringtown and Pig's Eye, Snowball and North Pole, Embarrass and Kiester, Coin and Money Creek, and Chickentown and Bull Moose. But how did these places get such unusual names? Wonder no longer as author Michael Fedo relates the curious and prosaic ways in which a place gets named.
Place names tell a rich history of how our state was settled. This compact guide presents the fascinating stories behind over 1,200 Minnesota place names. Included are all the names you'd expect--counties, larger towns and cities, major lakes and rivers--as well as the curious and odd. Culled from over 20,000 entries in the classic work Minnesota Place Names by Warren Upham, this concise guide is the perfect companion for anyone who travels the highways and waterways of the North Star state.
MICHAEL FEDO is the author of four other books including The Lynchings in Duluth and The Man from Lake Wobegon and has been a contributor to the New York Times, the Los Angeles Times, Newsday, and the Christian Science Monitor. He lives in Coon Rapids, Minnesota, a place named, not surprisingly, for the numerous raccoons that used to frequent the banks of Coon Creek.
ISBN: 0-87351-424-6