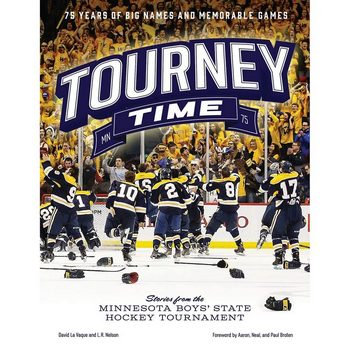 Every spring, the state of Minnesota—from urban metropolises to remote Canadian borderlands—is riveted by the spectacle of the boys' high school hockey tournament. Going back to the inaugural competition in 1945, the state tournament has produced incredible drama on and off the ice, featured legendary players, invigorated communities—and showcased some of the best hockey hair the world has ever seen. The tournament draws thousands to St. Paul, and countless more tune in on television screens around the state.

In Tourney Time, longtime sports journalists David La Vaque and L. R. Nelson take readers year by year through the tournament, highlighting the key games, the backstories, and the players that made each one shine. Interviews with players, coaches, and fans bring firsthand perspectives and insights to the games and tournaments, while in-depth statistics and results reveal the numbers behind the memories. In addition, the authors share their rankings of the most memorable moments, performances, characters, nicknames, upsets, and more from seventy five years of tournament play.